Skip to content
Loading...
Latest news
Making An Investment In Bonds Might Be Simpler Than You First Believed
Beginners guide to investment bonds
Strategies For Investing in Penny Stocks
How Safe Is It To Invest In High Yield Bonds?
Investing in US Savings Bonds and US Treasuries – Key Points
economynews 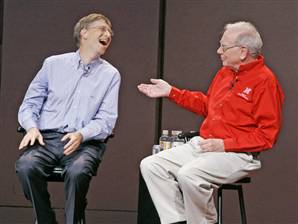 According to the world’s two richest men, capitalism is still alive and kicking despite struggling through one of the longest and deepest recessions since the Great Depression.

Warren Buffet, who recently acquired the Burlington Northern Santa Fe railroad, has announced that “The financial panic is behind us. The bottom has come in stocks. Don’t pass on something that’s attractive today.”

The famous investor and Microsoft founder Bill Gates recently attended an event at Columbia University in New York to field questions from Columbia Business School students about the recession, investing, and what’s going to be the next big company.

Bill Gates admitted, “We proved that we can make mistakes. But the fundamentals of the system, a marketplace-driven system where we invest in education and a great infrastructure for the long-term, that’s continued.” Even during America’s “darkest hour” he continued, businesses are still advancing.

The recession may be over, but recovery is not expected to prevent job losses or motivate businesses to start hiring again. There have been a net total of 190,000 jobs ended in October revealed in a government study on Thursday. October was the 22nd straight month of job losses causing the unemployment rate to jump to 10.2%, the highest in 26 years.

Buffet applauded the Bush administration for its actions last September after the collapse of Lehman Brothers caused a freeze in credit markets and alarm on Wall Street.

In the future, “there should be more downside to the head of any institution that has to go to the federal government to be saved for reasons of the greater society,” said Buffet.

Gates revealed an interest in environmentally friendly energy and medicine and ended with the words “Capitalism is great.”