Skip to content
Loading...
Latest news
Making An Investment In Bonds Might Be Simpler Than You First Believed
Beginners guide to investment bonds
Strategies For Investing in Penny Stocks
How Safe Is It To Invest In High Yield Bonds?
Investing in US Savings Bonds and US Treasuries – Key Points
investment opportunitystock tips 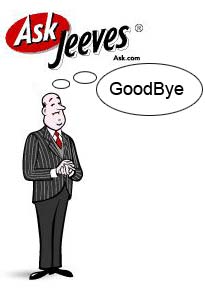 Unless you already have a major share in the search engine market, there isn’t much point in trying to compete. Contending with Google is tough enough, even for Yahoo or Microsoft. But, if you still feel like trying to get your foot in that huge metaphorical door, Barry Diller is looking to rid himself of Jeeves—if you ask nicely.

Diller’s legacy on the internet comes in the form of the search engine Ask.com, ranked at 4th place behind Google, Yahoo and Bing. With Google leading the race with an impressive margin, fourth position barely warrants notice. Ask.com can only boast a 2% U.S. market share, about 60 percent behind the giant force that is Google.

Diller said during the IAC third-quarter earnings call on Tuesday that, “we have been asked a lot whether we are open to consolidating transactions in the area of search.” The answer is yes, he answered, “and it is unlikely that we’d be the consolidator.”

So, who would be willing to buy this tiny search site? Microsoft has been called the “clearest logical buyer” by Colin Gillis, an internet analyst at Brigantine Advisors. This indicates a rise in market share fairly easily through the purchase. However, Ask has relied on Google for a lot of its revenue from an ad deal that was renewed a few years ago. Nowadays though, Ask is not likely to get an 89% share of ad revenue on the next renewal, making a deal difficult to close.