Skip to content
Loading...
Latest news
Making An Investment In Bonds Might Be Simpler Than You First Believed
Beginners guide to investment bonds
Strategies For Investing in Penny Stocks
How Safe Is It To Invest In High Yield Bonds?
Investing in US Savings Bonds and US Treasuries – Key Points
Uncategorized 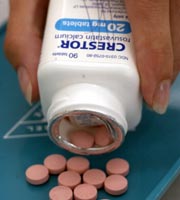 Crestor, a top-selling cholesterol pill manufactured by AstraZeneca, is set to be marketed to 6.5 million new American patients who were not candidates for cholesterol-lowering drugs.

New research has found that the drug is able to prevent heart attack, stroke and even death in patients with healthy cholesterol levels. FDA approval of the new drug will spark a dramatic expansion of the drug that is already a best-seller.

Crestor was a third-best selling drug for AstraZeneca with sales around $3.6 billion. This cholesterol drug has been taking an increasing amount of shares away from competitors such as Pfizer’s Lipitor.

The last quarter of sales for Crestor saw an increase of 30% to $1.15 billion in comparison to the previous year. Shares of AstraZeneca have risen by 32 cents and closed at $46.10 Tuesday.

As the British drug maker works on expanding sales of Crestor, there are also complications surrounding competitors from seven generic drug companies.

The companies, including Mylan Pharmaceuticals, Apotex and Sandoz, hope to launch their own cheaper version of Crestor. The patent will be challenged in a trial scheduled for February 2010.